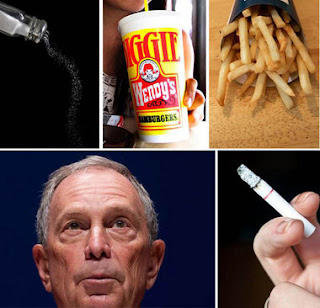 Mayor Bloomberg of NY seeks a ban on in-store cigarette displays a plan that would require store owners to keep cigarette displays out of the consumers eye line in a effort to reduce smoking rates.  The move if approved by the City Council would be the first of its kind in the US.

This reminds me of another brilliant idea of his, to ban sodas larger than 16 ounces.  Despite the ban being struck down by the NY Supreme Court, Bloomberg vowes to continue the fight.

Does Mayor Mike’s list of bans demonstrate real leadership on his part or simply micromanagement?  I say it is classic micromanagement!  It is all about control with him. These bans would control consumption and the displays in thousands of establishments in New York.   People who exhibit controlling behavior tend to be micromanagers; they tell you what is best, tell you what to do, use their authority to take charge, influence and get their way.  They set exacting standards of work, behavior, and what should be done and how.  There is an arrogance that only they know what is best for you.

If you have worked for a boss who is controlling you, telling you what to do, how to do it and exhibiting a number of behaviors that Bloomberg is demonstrating, would you tolerate that behavior. I would hope not!  My guess is that you would either leave the company (#1 reason people leave is their boss) or you would say something to human resources or your boss that their behavior is abusive, over reaching and impacts your commitment and engagement to the organization.

Citizens of NY,  have you had enough of Bloomberg telling you what is best for you?   Get engaged, speak up and let your voice be heard. If you work for a leader who exhibits micromanaging and controlling behavior speak up.  This style of leadership went out of favor a long time ago.  It is time leaders act in a different way.