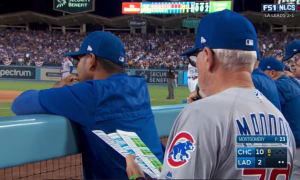 Joe Maddon, the manager of the Chicago Cubs, has 13 principles he uses to manage and lead himself and his team. Maddon’s first three principles build on each other. Without personal relationships, you cannot have trust. If trust does not exist, it is hard to respect others. Without trust and respect it is impossible to empower others. His third principle.

In my last post, I shared the only rule Maddon has for his team…“Respect 90”. Maddon has no other rule because he believes rules inhibit people from reaching their full potential. Maddon believes in freedom and empowering members of his team. He does not believe in over managing or in micro-managing.

His third principle is Freedom is Empowering. Think about it. The more you restrict freedom the more you restrict creativity in others. Maddon does not want to coach instinct out of his players. He creates an environment where his players are focused on their position and on the goal, but does it in a way that allows the player the creativity and instincts to achieve it.

I recently worked with an executive in the C-suite for a major conglomerate in a specialty industry. He micromanaged and over-managed his team. His behavior was classic micro and over managing. He told people what to do and to do it his way; he set unrealistic deadlines, he was constantly questioning his teams output, and he constantly was asking his team for updates on everything. His team was on pins and needles and they were worn out from his style. It was no wonder the employee engagement scores for his department were one of the lowest. It became apparent, after I interviewed his team, they felt powerless, frustrated and disengaged. His 360 results confirmed my qualitative interviews.

Fortunately, over time, the leader began to see how his micromanaging behavior was impacting his performance and the performance of his team. He created a personal action plan to change his behavior to enable his team to flourish. Over the past 18 months, his team engagement scores were one of the highest in the company. His team not only felt more freedom, but were also empowered to get the results they were focused on.

As a leader, how much freedom are you allowing your team to flourish? What is the level of engagement and commitment with your team? What behaviors are you doing that is causing those scores? What behavior change can you implement to empower your team?