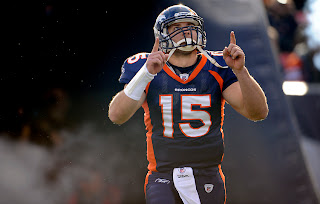 The Chicago Bears are my favorite NFL team. I was glued to the TV on Sunday watching the game unfold into another miracle 4th quarter win by Tebow and the Broncos. Like many of you, I am trying to answer the question: How does Tebow and his teammates do it week after week?  Is it divine intervention?  Is it due to the Bronco’s confidence that good things will eventually happen or is it just plain old LUCK? It is not luck at all.  It  is a combination of many attributes that Tebow brings to the Bronco organization as a leader.
We can learn a great deal about leadership from Tim Tebow. He may not take Denver to the Super Bowl this year; but he’s a winner both on and off the field.  It is refreshing to have a genuine role model to look up to today.  I am not sure about you but I am learning a lot from his example.  I hope you do as well. I am rooting for him.